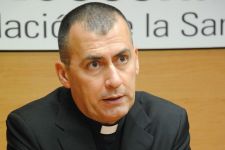 By Blanca Ruiz Erbil, Iraq, Jan 9, 2015 / 12:00 pm (CNA/EWTN News).- Archbishop Emil Nona is the Chaldean Archbishop of Mosul, the Iraqi city overrun by the Islamic State last summer. Since then, he has brought the voice of the Christians of Iraq to the West. “For us the faith is everything. It is our life, our identity, our history and our way of life. We can’t separate ourselves from our faith in any way,” Archbishop Nona told CNA. “Our faith, which has been in this land for more … Continue reading → 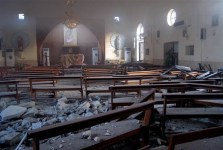 Misrata, Libya, Jan 14, 2015 / 03:12 pm (CNA/EWTN News).- A Libyan affiliate of the Islamic State claimed the abduction of 21 Coptic Christians on Monday, releasing pictures of those they had captured. “State of Tripoli”, Islamic State’s affiliate in Libya, published three pictures Jan. 12 of the kidnapped Copts with the caption “Soldiers of the Islamic State captured 21 Christian Crusaders,” according to the New York Times. Family members of some of the abductees from Egypt’s Minya province have reportedly identified them. The Egyptian foreign ministry has confirmed the … Continue reading →

When the Ottomans ruled Egypt, Christians were second-class citizens. They had to walk next to the walls in the street so they didn’t disturb commuters. Now, a documentary analyzes the discrimination that Copts face in the country after the Arab Spring. Making reference to Christians’ past in the country, it’s titled “Walking Next to The Wall.”

FERNANDO DE HARO
Director, “Walking next to the wall”
“Since Mubarak was put out of office, 100,000 Copts left Egypt for other countries. That only means that they can’t, or simply don’t want to live in their country. For a year, they suffered a very harsh under the Muslim Brotherhood. Once the Muslim Brothers left, they kept suffering under military regime.”

The documentary also delves into the history of Christianity in this region of the Middle East.

A history that Christians aren’t willing to give up, even though they are victims of fundamentalism and violence. Among some of the stories, there’s one of a woman who lost her husband while he protected a church.

FERNANDO DE HARO
Director, “Walking next to the wall”
“I asked her how she could keep her faith after having a husband killed and the hard times she was going through. She answered me: Christ died for me and a I can’t let him down.”

The situation is far from improving. In the last four years, 85 churches have been destroyed or sacked. The Christian community is still victim of persecution, murders and discrimination.

“There’s always danger, you know? You cannot fore shake your belief because of the attacks of the fundamentalists. I think that the history of the Church in Egypt always, when there’s persecution, there’s more believe and there’s stronger belief.”

Still, Egypt avoided an Islamist tyranny like the ones that took over Syria and Iraq. All hopes are placed in its new constitution.

The documentary shows that Christians still live in their country, and care for it. Their presence guarantees Muslim pluralism as well as the future of a Christian community that has lived there for almost two thousand years.

Bishop: I Cannot Resolve All the Situations ROME, November 26, 2014 (Zenit.org) – This reflection is provided by Sébastien de Courtois of Aid to the Church in Need. Since the beginning of the Iraq war in 2003, and especially since the eruption of the Syrian civil war in 2011, Turkey has become the destination—or passage way—for hundreds of thousands of refugees. Many of these are Christians from Iraq and Syria, and many are young, single people, prepared to take great risks. In early November, a boat carrying illegal migrants from … Continue reading →

During the Synod on the Family the date was announced, following the wishes of Pope Francis, that the consistory already envisaged for 20 October would be on the Middle East. The Patriarch of the Chaldeans, H.B. Louis Sako, explains to Oasis what is expected of it. By Marialaura Conte Interview with H.B. Louis Sako, the Patriarch of Baghdad of the Chaldeans. That the truth of the tragedy being experienced by Christians in the Middle East is listened to and at the same time what each member of the synod can do … Continue reading →

By Carl Bunderson Mosul, Iraq, Oct 23, 2014 / 04:21 am (CNA/EWTN News).- Reflecting on his recent trip to the Holy Land and to Iraqi Kurdistan, Archbishop Paul Coakley of Oklahoma City said that for all practical purposes, the bishops of Mosul no longer have Churches to shepherd. “When we were in Erbil, we met with the Archbishop of Mosul, who along with his priests and all of the faithful of the archdiocese, have been driven out,” Archbishop Coakley told CNA in an Oct. 16 interview. “He is, in effect, … Continue reading →

Aleppo, Syria, Oct 7, 2014 / 04:32 pm (CNA/EWTN News).- Militants linked to al-Nusra Front kidnapped a Catholic parish priest and as many as 20 people from a Christian village in Syria on Sunday night. The priest has been identified as 62-year-old Father Hanna Jallouf, O.F.M. “Let us pray for him and for the other victims of this tragic and senseless war,” the Custody of the Holy Land said on its website. The Custody of the Holy Land, which oversees Franciscan activity in the region, said the priest was kidnapped … Continue reading →

“At stake are fundamental principles such as the value of life, human dignity, religious freedom and the harmonious and peaceful coexistence between persons and between peoples.”   Vatican City, October 06, 2014 (Zenit.org) | 81 hits Here below is a press release issued by the Vatican on the Oct. 2-4 meeting of the Apostolic Nuncios in the Middle East with some superiors of the Roman Curia. *** No more war and violations of human rights! At the wish of the Holy Father, the Papal Representatives present in the Middle East … Continue reading →