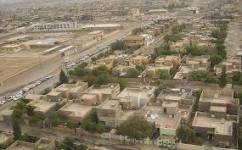 Kirkuk (Agenzia Fides) – Now also in Kirkuk in the province of which it is the principal city, many properties and homes belonging to Christian citizens are being taken from the legitimate owners by means of falsified documents which prevent the legal owners from regaining their property. The phenomenon, confirmed and reported also in Baghdad, began thanks to connivance and cover-up on the part of corrupt and dishonest officials, at the service of individual or organised gangs of impostors and swindlers. In a recent case – according to the Iraqi … Continue reading →

Fr Giuseppe Parietti saw yesterday’s twin market attacks in person. He spoke about the minutes after the blasts and how things are now. Religious fanaticism and poverty makes young people vulnerable to radicalism. However, countries that sell arms also play a role. In Cameroon, Muslims are in favour of peace. Yaoundé (AsiaNews) – Fr Giuseppe Parietti, regional superior for the Pontifical Institute for Foreign Missions (PIME) in Cameroon, was at Maroua’s central market – near the Hausa neighbourhood –when two 15-year-old girls blew themselves up, yesterday. “I was just a … Continue reading → 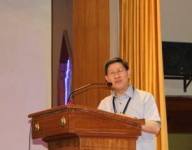 Speaking at a conference in India, the cardinal mentioned a private interview he had with the Holy Father. “Places of great suffering have become the centre of gravity of the Church,” he said. Hence, “We take our responsibility very seriously”. Bangalore (AsiaNews/Matters India) – “The future of the Church is in Asia”, said Pope Francis when he received Cardinal Luis Antonio Tagle. The Filipino cardinal spoke about it at the last session of a conference organized by the Pontifical Athenaeum for Philosophy, Theology and Canon Law in Bangalore, southern India. … Continue reading → 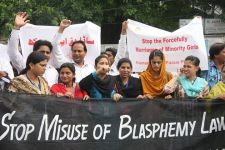 The two brothers have been accused of posting disrespectful content on their website. After four years on the run abroad and at home, Qaisa and Amoon are now in the same Lahore prison. The Centre for Legal Aid, Assistance and Settlement (CLAAS) is dealing with their case. Lahore (AsiaNews/CLAAS) – Two Christian brothers have been arrested on blasphemy charges after one of them was accused of posting disrespectful material on his website. A case has been registered against Qaisar and Amoon Ayub of Lahore in relations to accusations dating back … Continue reading →

It was just over one year ago…On June 10th, the Islamic State took over the Iraqi city of Mosul, the second largest in the country. Locals were given three options: covert to Islam, pay a fine for being Christian or thirdly-death. In a matter of hours, thousands decided to flee from their homes, refusing to convert or to pay a 250 dollar fine for being part of a religious minority. Many took refuge in Kurdistan, an autonomous region of Iraq, where residents live in relative peace. Archbishop Bashar Warda is … Continue reading →

For expert, the two-minute video shot in Syria a few days ago, is “strategic propaganda”. An estimated 500 Indonesians have left for Syria. Police have arrested several facilitators. Jakarta (AsiaNews) – A two-minute video has surfaced showing more 70 Indonesian-speaking men in military fatigues and armed with rifles preparing for a field assignment with the Islamic State (IS) group. In the video, the men seem to be in good spirits, and refer to themselves as the Ikhwan Nusantara, or the brothers of the archipelago – a reference to Indonesia, which … Continue reading → 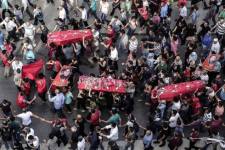 The PKK claimed responsibility for the killing of two police officers in a “punitive action” against the Turkish state guilty of cooperating with Jihadis. Twitter was blocked because it gave access to pictures and videos from the massacre. Prime Minister Ahmet Davutoğlu and his cabinet met for an “action plan” to improve security on the Syrian border. Istanbul (AsiaNews/Agencies) – Emotions and tensions ran high in Istanbul as some of the victims of the Suruç attack were laid to rest today. Hundreds of men and women holding hands surrounded the … Continue reading →

Abuja (Agenzia Fides) – “Boko Haram is still able to strike and unfortunately cause victims, but unlike a few months ago, no longer controls towns and villages”, says Fr. Patrick Tor Alumuku, Director of Social Communications of the Archdiocese of Abuja. The Islamist sect struck in northern Nigeria, where 43 people were killed last week in attacks against four villages in Cameroon (11 died in an attack on July 12) and in Chad (15 victims in an explosion in the capital N ‘Djamena on July 14). These Countries, along with … Continue reading → 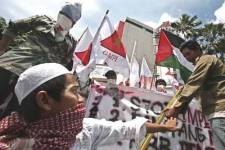 by Mathias Hariyadi A church in Purworejo and a prayer house in Bantul (Yogyakarta), central Java, are attacked in incidents connected to an arson attack against a small mosque in Papua that killed one person and wounded 12 others. For an Indonesian priest, a “thorough investigation” is needed to find the culprits and defuse sectarian tensions. Jakarta (AsiaNews) – A new wave of sectarian violence is sweeping Indonesia, the world’s most populous Muslim nation. In the recent past, the country has been the scene of a rising Islamist tide that … Continue reading →