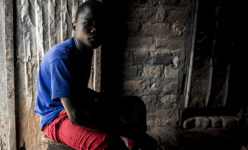 February 12th marks the International Day against the Use of Child Soldiers. It’s estimated that worldwide, there are roughly 300,000 kids, forced into armies. It’s a common practice for many terrorist groups, like Boko Haram, which has a strong presence in Nigeria. CARD. PETER TURKSON President, Pontifical Council for Justice and Peace “They strap the bombs to these young people because the military guys are not likely to search them very stringently. They can make them suicide victims.” South Sudan is also facing this challenge. According to a UN report, … Continue reading →

Fr. Mauro Armanino Says Boko Haram Invasion Spurs Attacks Against Christians in the Country By Staff Reporter ROME, February 11, 2015 (Zenit.org) – While several African countries have joined forces to combat the onslaught of Islamic extremist group Boko Haram, a missionary in Niger says local Christians are fearing for their lives. The terrorist organization, which has wreaked havoc in Nigeria, brought their war to neighboring Niger, attacking the border city of Diffa. Niger’s Parliament approved the country’s participation in a Task Force that will combat Boko Haram. The task … Continue reading →

Niamey, Niger, Jan 30, 2015 / 04:01 am (Aid to the Church in Need).- Boko Haram is determined to take its jihadist campaign beyond Nigeria. Its next targets include Niger, where, as reported in an email message from a woman religious working as a missionary in the country, the group has proclaimed that “Christians must die.” Currently in hiding along with her fellow missionaries in private homes in Niger’s capital of Niamey, the sister wrote to international Catholic charity Aid to the Church in Need. Last week’s violent protests in … Continue reading →

These Nigerians aren’t fishing. Rather, they are fleeing their hometown, escaping the violence Boko Haram is raging against them. The radical Islamic group, has forced thousands of people to flee from Nigeria into neighboring countries like Chad, Cameroun and Niger. HUSSENNA MAHAMD Nigerian Refugee “We managed to escape and we ran towards the lake. We took a boat and started rowing. The men from Boko Haram were shooting at us the entire time. They even took a boat and followed us.” The recent wave of violence comes from fighting between … Continue reading →

(CNA/EWTN News).- Boko Haram’s expansion has meant murders, forced conversion, and forcible expulsion from homes, causing Catholics in Nigeria to pray and to reach out to help and console the militant Islamist group’s victims. “Brothers and sisters, there is no better time to storm the heavens with prayers and petitions than now,” Archbishop Ignatius Kaigama of Jos said during a national prayer pilgrimage Nov. 13-14. Thousands of people have recently lost their homes and their loved ones due to Boko Haram, he said. “Our darling innocent school girls from Chibok … Continue reading →

AFRICA/NIGERIA – At least 2,500 Catholics killed in violence by Boko Haram, Bishop of Maiduguri reports Abuja (Agenzia Fides)- Some 2,500 Catholics of the Nigerian diocese of Maiduguri have been violently killed in Boko Haram violence, local Catholic Bishop Mgr Oliver Dashe Doeme told THISDAY a local newspaper. The Bishop has taken refuge with thousands of his faithful, in the parish of Saint Teresa in Yola in Adamawa state. The diocese of Maiduguri (capital city of Borno state) is in north eastern Nigeria which comprises the states of Borno, Yobe … Continue reading →