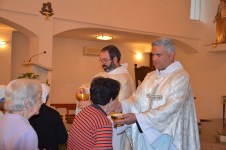 With great joy we celebrated yesterday, March 25, 2014, the Solemnity of the Incarnation in our cathedral church. On this day especially we pray for those who did not know that God is Emmanuel, which is “God with us.”   And  we ask you all to pray for us to be faithful to the mission of proclaiming the “Word who is the true light that enlightens every man.” God bless you! Missionaries of the IVE in Iraq 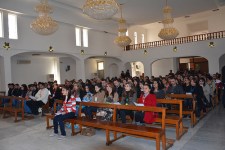 They came from Syria, France, Argentina, Belgium, and India to Mesopotamia. Some of them have been living in Iraq more than forty years to witness to the love of Christ in the land of martyrs. They love Baghdad and its people and decided to continue living and serving this country despite the enormous challenges, hardships and lack of security. Working in Baghdad silently and with great humility, those missionaries care only to announce the word of God to those who are hungry for it. They did not hesitate last Friday … Continue reading →

In this place where we are carrying on our mission, there are things that seem impossible when seen from outside. Often, you get used to them in such a way that you note their strangeness only in other environments and on seeing the reactions of the people. These expressions of surprise make us become aware of how strange these strange things are. An example of this is the matter of dangerous professions. In a “normal” world, some activities are considered dangerous because of what they involve, because of the accidents … Continue reading →

On Sunday, November 24 we celebrated the Feast of Christ the King in an atmosphere of great joy. The apostolic nuncio, Monsignor Jorge Lingua celebrated the mass and the church was full. Despite the difficulties to travel in Bagdad, people from many places of the city attended. One must take into account that besides fearing attacks, there are other difficulties: because it was an even day, those who could travel in cars were those who have even patents (it’s a meaningless law that exists here established to reduce the traffic … Continue reading → 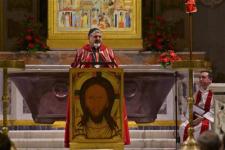 ASIA/IRAQ – Najaf (Agenzia Fides) – Violence that affect Christians in Iraq represent a loss for the entire country. This is the conviction expressed by Ayatollah Ali al-Husayni al-Sistani, during a meeting on Wednesday, January 8th with a delegation of the Community of Sant’Egidio received in audience by the major political and spiritual leader of Iraqi Shiites in the holy city of Najaf. This was made known by local sources consulted by Fides Agency, that reported the contents of a press conference held after the meeting by Andrea Trentini, a member … Continue reading → 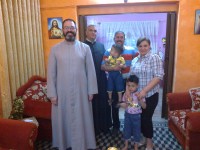 You are crazy! What are you doing here? The reactions from people when we tell about our mission in the Middle East are varied. But there is one that is repeated time and time again. Many times we have heard expressions like the above because we remain in these places. Normally we answer by repeating what Christ said “Go into all the world” and not just to the places which we know, we understand, places that are safe, or where the majority are Christians, etc. Also we have to go … Continue reading →

Our joy is Jesus Christ, your love is faithful and inexhaustible! (Pope Francis) Merry Christmas! Fr. Jorge, Fr. Luis and catholic community of latin cathedral of Baghdad Missionaries of the Institute of the Incarnate Word in Iraq 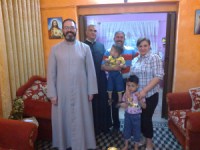 News from Baghdad When we are asked how we are, we find it difficult to explain our situation. On the one hand we live in a country where – according to some estimates – there are over 20 attacks per day. The danger is real and is just around any corner. Just as an example: the other day a woman came to give thanks for her son. The youth was traveling by bus within the city and got off at his destination. At that moment a bomb exploded inside the … Continue reading →

How many have people died because of the war in Iraq? Depending on who provides the figures, the number varies from 150,000 to 1,500,000. The two most respected studies also vary greatly in their estimates: The Opinion Research Business organization estimated that there have been 1,033,000 violent deaths due to the war in Iraq, from 2003 to 2008. Amy Hagopian of the University of Washington published a study in the journal PLoS Medicine on 15 October this year, asserting that the death toll, since the outbreak of war until June … Continue reading → 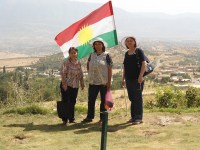 In Iraq the procedures to renew residency status are not so complicated, but are cumbersome. After requesting a letter from the Bishop, spending a whole morning in the Christian affairs office, and visiting approximately 30 offices in the building where the paperwork for residency is processed, one has to wait for the paperwork  to go through all the state revisions until the ok is given. The wait time is anywhere from one to ten months. In theory, we have had the residence (per year) an average of six months and the rest was waiting on … Continue reading →