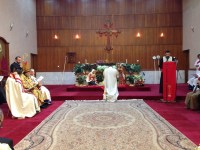 by Bernardo Cervellera There are at least half a million people who have taken refuge in Kurdistan to flee from ISIS. In the Shlama Mall at Erbil: 350 people living in the skeleton of a building under construction, with draped sheets and blankets serving as walls. The ordination of a young man, also a refugee, shows that with the flight, there is something that has not been destroyed: the faith, the traditions, the priesthood. Erbil (AsiaNews) – A visit that is a kind of Stations of the Cross. This is … Continue reading →

Two parishes, one in USA and the other in Italy have collected money, which they sent us for the refugees. The total donation they sent was $10,000. A community of sisters in Peru also donated some money for the Iraqi displaced people. We want to thank them for such beautiful gesture. Such Christian communities who showed readiness to help the needy ones reflects an act of love, charity and solidarity; they prove that they are alive! They follow Christ’s example who “takes pity on them”. They are helping Christ himself … Continue reading → 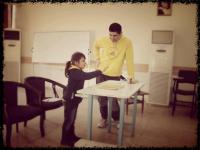 Our friend Pimpa is sending us this thanking message from Italy. We are the ones who have to thank him for all what he did! Blessings to Pimpa!   The faces of these “adult”-children marked by a sense of coldness and gloom for their fleeing their houses,persecution, are actually still alive, becoming the simplest reason of joy. Simple like seeing a plate of soup, Simple like wearing new shoes, Simple like drinking a glass of water. My greetings to all these magician-clowns from Baghdad, grown ups and children. You are … Continue reading →

Interview with H.B. Louis Sako, the Patriarch of Baghdad of the Chaldeans. That the truth of the tragedy being experienced by Christians in the Middle East is listened to and at the same time what each member of the synod can do in their country to help them – this is what H.B. Louis Sako, the Patriarch of the Babylonia of the Chaldeans, expects from the next consistory of 20 October, which was already envisaged for certain canonisations and which, following the wishes of Pope Francis, will be an opportunity … Continue reading →

Bishop: I Cannot Resolve All the Situations ROME, November 26, 2014 (Zenit.org) – This reflection is provided by Sébastien de Courtois of Aid to the Church in Need. Since the beginning of the Iraq war in 2003, and especially since the eruption of the Syrian civil war in 2011, Turkey has become the destination—or passage way—for hundreds of thousands of refugees. Many of these are Christians from Iraq and Syria, and many are young, single people, prepared to take great risks. In early November, a boat carrying illegal migrants from … Continue reading → 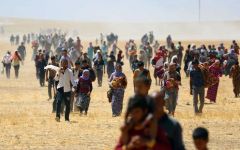 Christian, Yazidi and other refugees in the Kurdistan region of northern Iraq who fled Islamic State terrorists now face a freezing winter with temperatures of 35 to 55 degrees and few resources to sustain them. “Winter is upon them, and it is already cold at nights, but they don’t have anywhere to go,” Juliana Taimoorazy, president of the Iraqi Christian Relief Council told the National Catholic Register. “This is a human tragedy unfolding in front of our eyes, and not enough is happening. The refugee camps are already affected by … Continue reading →

Pope Francis released his message for next year’s World Day of Migrants and Refugees entitled “Church Without Frontiers, Mother to All”.

It reflects on the hardships faced by migrants and refugees, and encourages the Church to “take on new commitments of solidarity, communion and evangelization”.

Cardinal Antonio Maria Vegliò, president of the Pontifical Council for Migrants and Refugees, spoke on the significance of the Pope’s message in this time, where immigration and the plight of refugees has affected the world on a global scale.

CARD. ANTONIO MARIA VEGLIÓ
Pontifical Council for Migrants and Refugees
“The message has two aspects, two points on which it focuses on: the world of immigration and the world of refugees.”

The message also stresses that while cooperation is necessary to provide more humane conditions for migrants, greater efforts must be made to improve conditions that compel people to leave their homeland.

Cardinal Vegliò highlighted Pope Francis’ call to migrants and refugees to not lose their faith and hope in the midst of difficulties.

CARD. ANTONIO MARIA VEGLIÓ
Pontifical Council for Migrants and Refugees
“This is very beautiful, despite the difficulties that we recognize of this problem. The Pope says clearly that they have a privileged place in the Church. Precisely because they are those who are most in need, because they are the most vulnerable.”

The Cardinal also said that upcoming Synod on the Family will discuss the difficulty of reuniting families who have been separated due to migration.

CARD. ANTONIO MARIA VEGLIÓ
Pontifical Council for Migrants and Refugees
“The reunion, the reunification of the family is truly a tragedy. When the husband leaves for example, it is difficult for the family to remain united. So, the problem of reunification will be examined. ”

The World Day of Migrants and Refugees will be held on January 18th, 2015.